Five hundred years have passed since the devastating demon-led war that almost exterminated humankind. Those who escaped the carnage were led to sanctuary by the boy saviour known as Hawk: the gypsy morph. But now, the unimaginable has come to pass: the cocoon of protective magic surrounding the valley has vanished. When Sider Ament, last surviving Knight of the Word, detects unknown predators stalking the valley, and Trackers from the human village of Glensk Wood find two of their own gruesomely killed, there can be no doubt: the once safe haven of generations has been laid bare. Together, the young Trackers, the aging Knight and a daring Elf princess race to spread word of the encroaching danger. But suspicion and hostility among their countrymen threaten to doom their efforts from within, while beyond the breached borders, a ruthless Troll army masses for invasion. Standing firm between the two, the last wielder of the black staff and its awesome magic must find a successor to carry on the fight against the cresting new wave of evil. 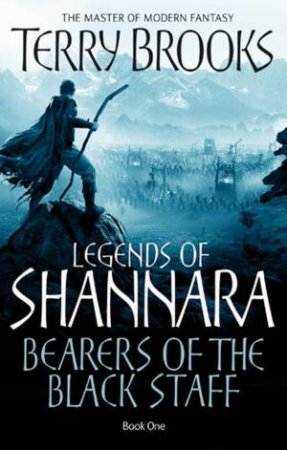 Bearers of the Black Staff
Terry Brooks
$22.99
RRP refers to the Recommended Retail Price as set out by the original publisher at time of release.
The RRP set by overseas publishers may vary to those set by local publishers due to exchange rates and shipping costs.
Due to our competitive pricing, we may have not sold all products at their original RRP.