The danger is increasing for Grianne Ohmsford, rightful High Druid of Shannara, who has been banished to the harsh world called the Forbidding by a treasonous fellow druid. Her only hope for rescue is her nephew Pen - but Pen is under siege as well. Both he and his parents are sought by the Druids, who want to make sure that their magic will never help Grianne to return. Yet no one but Grianne is aware that her banishment into the Forbidding - accomplished with the use of dark magic - allowed the simultaneous transference of a fearsome denizen of the Forbidding back into Grianne's world. No one but Grianne is aware of its existence in the Four Lands - a creature that can take on any shape, can kill at will, and is only the harbinger of a much greater, devastating invasion. 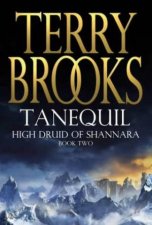 Tanequil
by Terry Brooks
22.99
22.99
_% Off
RRP refers to the Recommended Retail Price as set out by the original publisher at time of release.
The RRP set by overseas publishers may vary to those set by local publishers due to exchange rates and shipping costs.
Due to our competitive pricing, we may have not sold all products at their original RRP.