Imprisoned in the Druid's Keep, young Pen Ohmsford is separated from all who care for him, and at the mercy of the usurper Shadea a'Ru, who will do anything to destroy the rightful High Druid. Although Pen was successful in his mission to obtain the magical staff called the Tanequil, Shadea has taken it from him. Without the Tanequil, Pen cannot open the gateway to the Forbidden and rescue his aunt, the rightful High Druid. Pen has allies, but they are under siege as well -- his parents fleeing from the Druids, the Rock Troll Kermadec and the dwarf Tagwen far away, and the young elf Khyber Elessedil in deadly danger within the Druid's stronghold. Can the scattered band of friends join forces in time to defeat Shadea's evil plot? 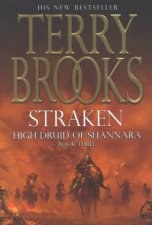 Straken
by Terry Brooks
49.95
49.95
_% Off
RRP refers to the Recommended Retail Price as set out by the original publisher at time of release.
The RRP set by overseas publishers may vary to those set by local publishers due to exchange rates and shipping costs.
Due to our competitive pricing, we may have not sold all products at their original RRP.