Twenty years have passed since Grianne Ohmsford denounced her former life as the dreaded Ilse Witch - saved by the love of her brother, the magic of the Sword of Shannara, and the destruction of her evil mentor, the Morgawr. Now, fulfilling the destiny predicted for her by Walker Boh, she leads a new Druid Council dedicated to defending the Four Lands from anarchy and warfare. Yet despite her devotion to the greater good, Grianne still has enemies - those who cannot forget her reign of terror as the Ilse Witch . . . and who covet her seat of power. When she vanishes suddenly, it falls to her young nephew, Pen Ohmsford, the faithful dwarf Tagwen, and the elf Ahren Elessedil, to undertake a perilous mission to save Grianne from a fate worse than death. 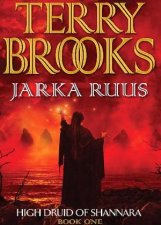 Jarka Ruus
by Terry Brooks
29.95
14.95
50% Off
RRP refers to the Recommended Retail Price as set out by the original publisher at time of release.
The RRP set by overseas publishers may vary to those set by local publishers due to exchange rates and shipping costs.
Due to our competitive pricing, we may have not sold all products at their original RRP.